We’re all currently witness to a special time in history for advances in healthcare. Proliferation of new biomedical technologies is at an all-time high and generating more health data (genetic, clinical, lifestyle, etc) than we dreamed we’d ever have. And yet, despite this abundance of data and associated insights, when it comes to developing drugs for some of the most prevalent diseases of our time, we are largely still spinning our wheels on the question of “what exactly to drug in the first place?”

A majority of these conditions fit a similar profile - they might present as one disease, when they’re actually a multitude of different diseases. In many complex diseases, we know a particular set of genes is involved, but have no idea which molecular mechanism will “fix” it.

And that’s a big deal because ultimately, the drugs we create are targeting specific biochemical mechanisms inside the body in hopes of correcting their behavior. So, how can we develop a new drug to treat a complex disease if we don’t really know which molecular mechanism the drug should even target in the first place?

The short answer is that it’s very difficult and inefficiently done today, requiring lots of trial and error. This is in large part why a majority of complex diseases remain unsolved and also why it costs an estimated $1B+ to successfully develop a new drug and why biopharma companies are becoming increasingly less productive over time, spending more in R&D per each new treatment approved. All of which are unsustainable trends.

To eliminate this guessing game, we need to unlock a new data layer for complex diseases - a way to examine precisely what’s going on at the molecular level when they interact with a new drug. With data at that level of granularity, we could effectively examine and ‘debug’ disease processes and drug interactions at a scale never before seen, enabling us to accurately determine which mechanism or combinations of mechanisms to target, and how a new drug can be designed to accomplish that. 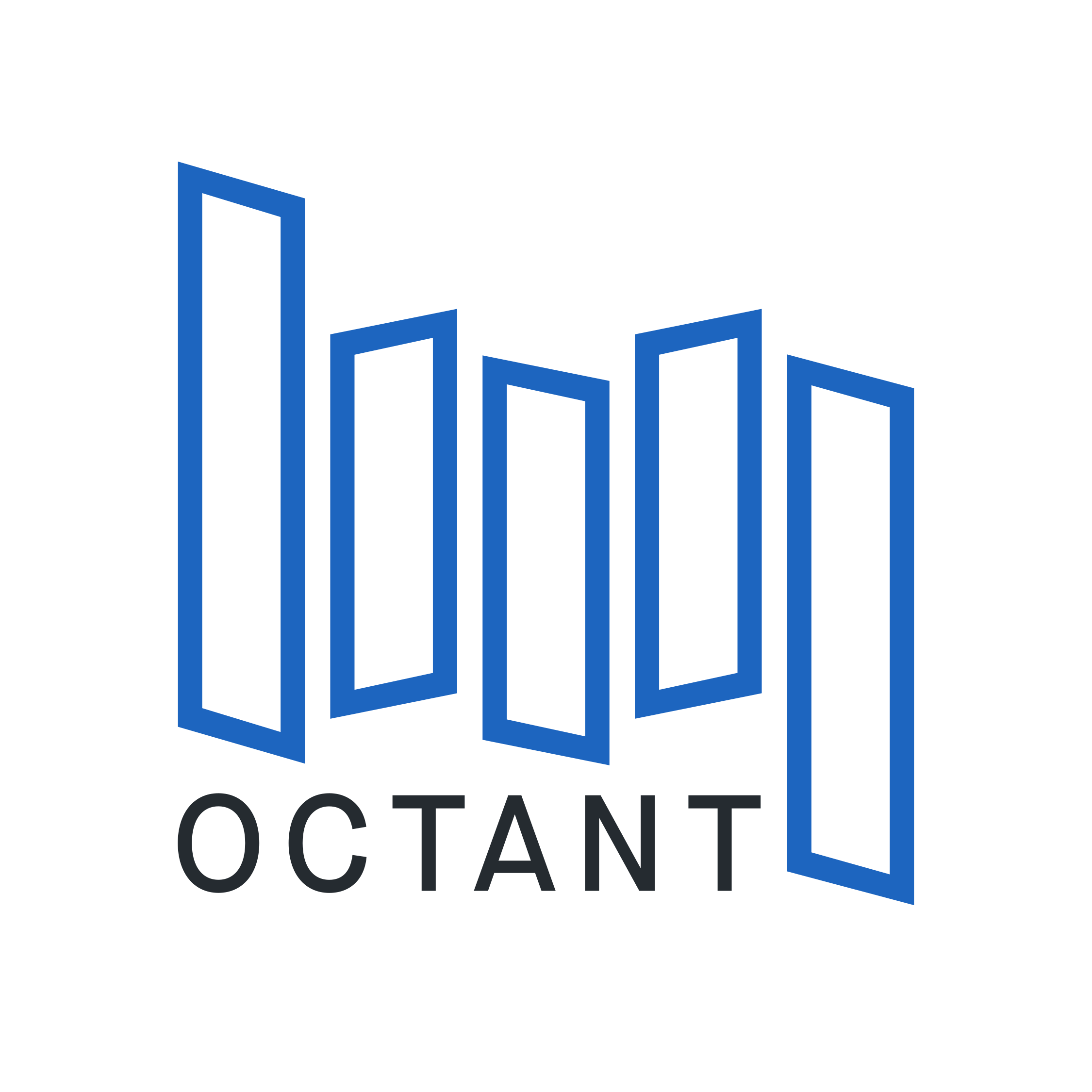 Octant envisions an entirely new approach to tackle complex diseases, one that integrates the tools of synthetic biology to transform large-scale drug discovery.

Octant’s drug development platform uses synthetic biology, synthetic chemistry, and computation to engineer cells with the ability to track and provide real-time, precise and complete readouts of the complex interactions and effects that drug molecules have within living cells. In other words, if you expose these engineered cells to a drug, the cells keep track of exactly how the drug impacted it and which pathways were affected in the process.

They accomplish this by genetically modifying DNA to act as a unique barcode for each of the most common drug receptors inside the human genome, the same receptors that help control everything from immune responses, to the firing of neurons, the release of hormones, and communications between cells. Using these unique barcodes, Octant can trace how different receptors respond to various chemicals in the body and proceed to map and measure the interconnected relationships between receptors, chemicals, biochemical function, multiple drug receptor pathways, and diseases. 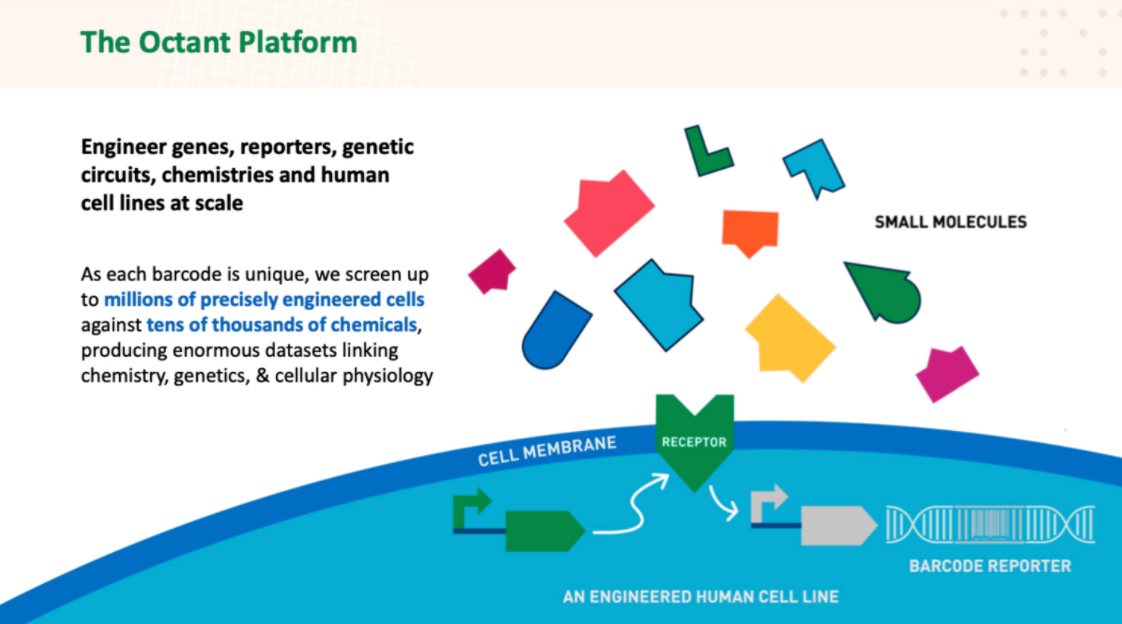 Some of the most valuable drugs in history are the ones that work on complex sets of drug targets, which is why Octant’s approach is especially compelling. The massive data sets enabled by the Octant platform promise to unlock unprecedented insights into the underpinnings of disease and enable Octant to engineer multi-targeted drugs in a more rational way. 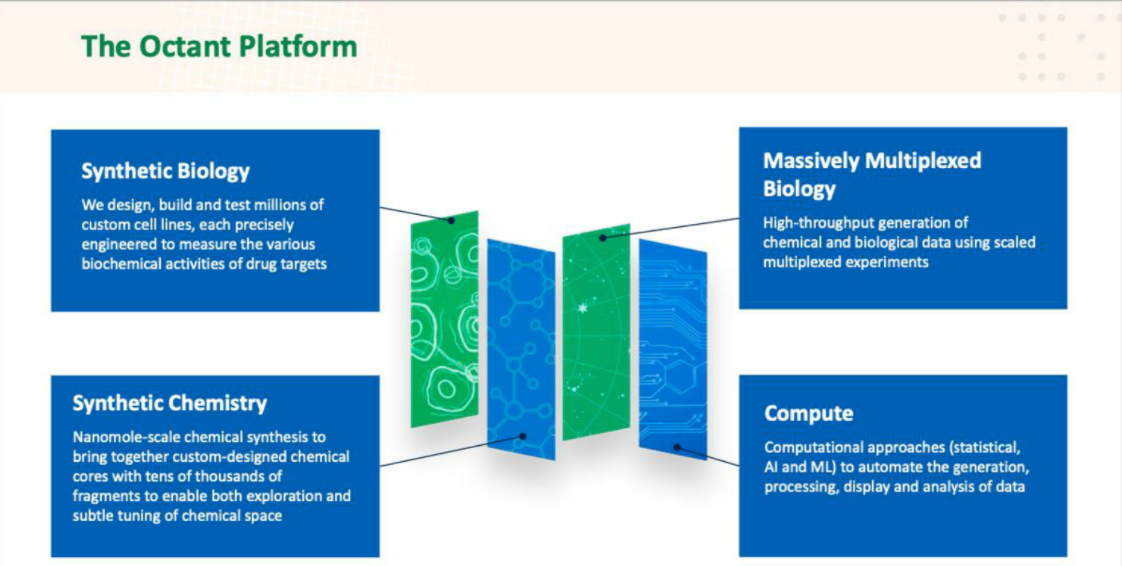 With their platform, Octant will be uniquely capable of building novel drugs that match the complexity of the diseases they are treating.

Octant designs and builds hundreds to thousands of genetic programs at a time, and engineers them into human cell lines. Each engineered line is designed to test a particular drug target, which if activated, turns on the expression of an engineered genetic barcode. The cell lines are mixed, drugged, and all the barcodes are measured at once using next-generation sequencing.

In each platform run, the company uses high-throughput chemical synthesis and screening to test thousands of drugs against these libraries per run and has built experimental and computational pipelines to generate and analyze these datasets routinely.

Octant uses the power of this platform to answer two key questions. 1) what are the subtle combinations of receptors and pathways that, when drugged, are able to treat disease safely and effectively? 2) How do we rationally engineer new drugs that are programmed to modulate these complex multi-target profiles?

The Octant platform has increased output >100x, enabling them to rapidly experiment and build novel, differentiated compounds customized for more complex target profiles, including several with potencies equal or better than existing compounds that Merck and Pfizer took to the clinic.

Over the past 9 months, the company synthesized 145k compounds, revealing 4 compounds that demonstrated in vivo efficacy in mice in addition to many functional in vitro leads in their drug program focused on treating retinal pigmentation.

As an anecdote demonstrating the team’s character and ability to move quickly, when they realized a portion of their platform could be repurposed to help with early covid detection efforts, they quickly developed a novel protocol and made it freely available. This effort later evolved into a partnership with Ginkgo Bioworks that has since concluded.

Over the next 18 months, the company will be focused on expanding their platform and advancing leads from multiple programs to the clinic stage. They also plan to explore growth and revenue opportunities connected to partnerships with large strategics.

Since 2007, the price of sequencing DNA has dropped 100,000-fold. There has been similar progress in gene synthesis and engineering, as well as in the computation techniques required to understand the resulting huge datasets. This confluence of rapid progress enables a single person to conduct biological experiments at scales that were recently impossible, even at the world’s largest laboratories, which in turn drives the growth of the global drug discovery services market. The Octant platform uses these new technologies at unprecedented scale to systematically map how chemicals interact with drug targets and the major pathways that control physiology at the cellular level, and build novel drugs tailored suited to critical targets identified.

CEO Sri Kosuri is a tenured Professor at UCLA in the Chemistry and Biochemistry Department and one of the leading synthetic biologists in the world. He previously worked at the Wyss Institute as well as Harvard, as part of George Church’s lab, and is an MIT and Berkeley graduate.

Co-founder Ramsey Homsany was an executive at Dropbox during its ascent to 500M+ users and a $1B+ revenue run rate. Prior to Dropbox, Ramsey was a VP at Google and tech attorney at Wilson Sonsini Goodrich. He studied Chemical and Biochemical Engineering at Rutgers and followed by NYU Law.