Los Angeles, CA
Microscale Robotics for Targeted Delivery of Therapeutics in the Brain

Bionaut Labs is building a first-of-its-kind, microscale robotics platform designed to deliver drug therapies to hard-to-reach regions of the central nervous system, without exposing patients to off-target side effects.

Chances are you or someone you know has been directly affected by one of these. Collectively, they are some of the most debilitating conditions known to humans.

Their severity is in large part due to direct impact on the brain, the supercomputer in our heads that interprets the world around us and orchestrates the complex symphony of our thoughts, behaviors, body movements and overall health. Impair this essential organ past a certain point and its ability to handle that complexity inevitably falls apart. However, impairment alone does not explain why there are so few available treatments for patients.

It turns out that evolution is partly to blame. While the human body evolved over time to maximally isolate and protect the brain and spinal cord, effectively recognizing these areas to be essential to survival and well-being, those same protections currently impact our ability to safely and effectively deliver therapies to specific locations in the central nervous system. We’ve created a vault to protect our most valuable assets and locked ourselves out in the process!

This has presented critical challenges over time when it comes to delivering medicines to diseased regions of the brain, including:

And unfortunately, despite exciting technology advances and new therapy types that are showing great promise in fighting disease, such as gene therapies (CRISPR, AAV), cell therapies (CAR-T), immunotherapies (IL12), antibodies/ADC, oncolytic viruses, si/miRNAs, and ASOs, these approaches continue to fall victim to the same critical challenges that have stymied progress in the past.

Discovery of a way to safely and precisely deliver targeted therapies to specific locations in the central nervous system would be revolutionary.

We could use that newfound ability to treat the inaccessible tumors deemed "incurable", avoid high-risk, invasive brain surgeries, and stop irreversible damage after stroke, head or spine injury. We could finally treat neurodegenerative diseases, epilepsy, and addiction, at the source. And so much more…

Bionaut Labs is building a first-of-its-kind, microscale robotics platform designed to deliver drug therapies to hard-to-reach regions of the central nervous system, without exposing patients to off-target side effects.

You can think of Bionauts as a spaceship designed to safely and efficiently navigate the central nervous system, deliver a cargo payload (the drug therapy) to a precise destination in space, and return home safely.

Each Bionaut contains moving parts controlled remotely by a compact magnetic controller, allowing them to move inside the body, slice tissue and release therapeutic payloads (between 100s of nanometers to single millimeters) from the cargo compartment in a safe and predictable manner to anywhere within the central nervous system, and back.

Bionauts are custom-engineered within a range of sizes, payloads, shapes, topologies, and functions—all driven by the disease site being targeted, the route required to reach that site, the therapeutic payload, and how the therapy needs to be dosed at its target site. This engineering flexibility provides a broad foundation for designing Bionaut therapies for nearly any therapy type or disease focus, with potential to transform how new drugs are developed and delivered to the body.

The Bionaut platform includes the Bionaut microscale robot itself that carries the therapeutic payload, a delivery and retraction device, real-time imaging to track the Bionaut’s motion and position, a propulsion system to magnetically guide the Bionaut, and an integration and control system.

While conventional technologies use established routes through the body, such as stents in the vasculature, Bionauts can travel “off road” to traverse through the body with 360-degrees of freedom into the densest of tissues in a non-invasive to minimally-invasive manner. For example, Bionauts can navigate through CSF, the ventricular system, the cisterna magna, as well as through brain tissue, in a safe and precise manner.

Bionaut’s imaging technology and precision controls allow an operator to guide a Bionaut with the optimal speed, motion, and route, taking advantage of natural seams in the tissue. The technology will also include operator feedback mechanisms to prevent departure from safe trajectories.

This may all sound like science fiction, but Bionaut Labs is rapidly approaching clinical trials.

The company is initially targeting rare brain diseases where the impact on the lives of patients is devastating and there are few effective treatment options, such as glioma (brain cancer), Huntington's, and Parkinson's. 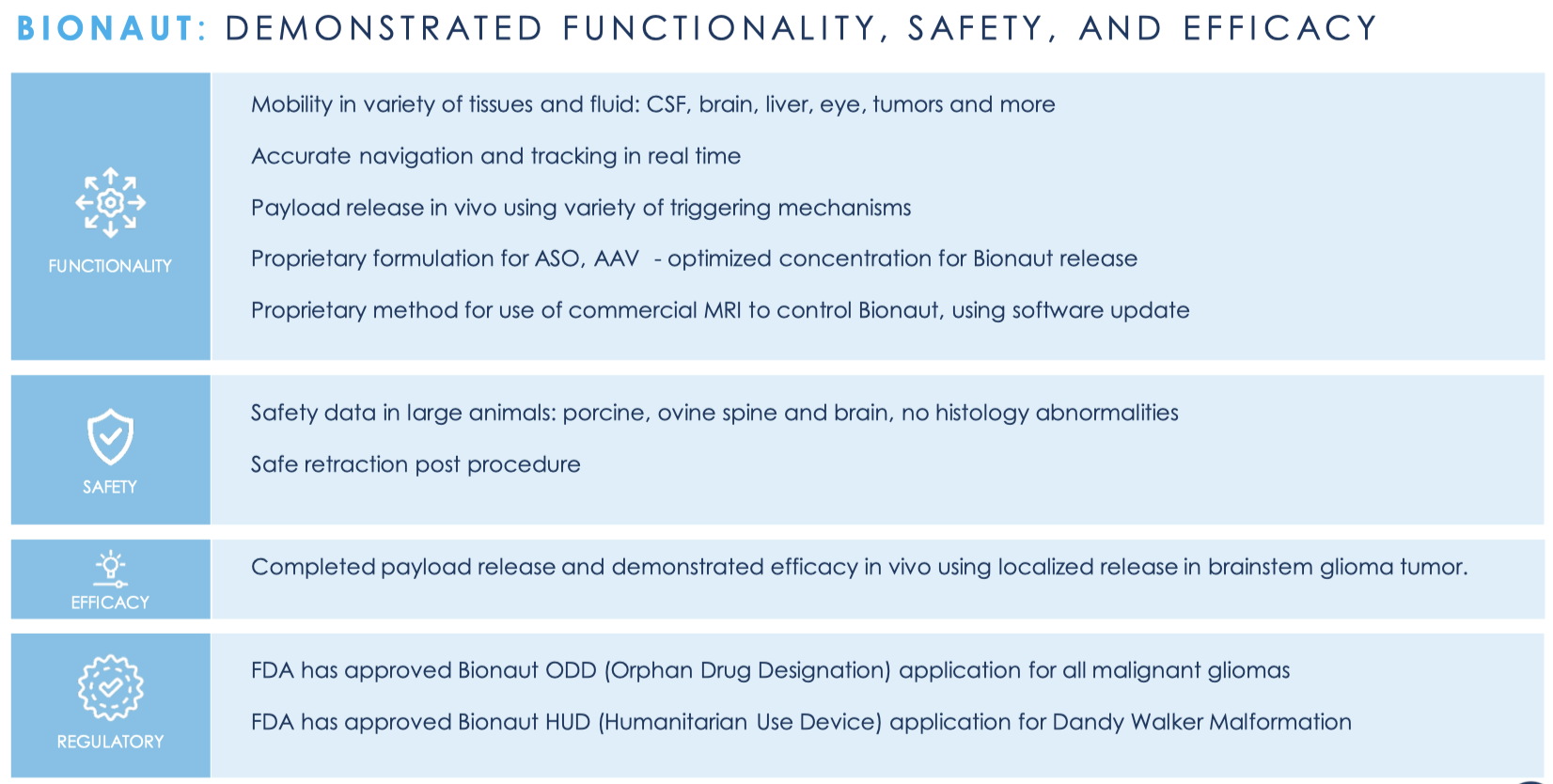 To date, the company has demonstrated safe and controlled navigation of its therapeutic Bionaut to and from the treatment site in the brain, in a large animal in vivo model. Furthermore, the company has successfully treated human glioma tumors established in mice, utilizing guided delivery of therapeutic cargos directly into these tumors to eliminate systemic toxicity. These results pave the way to the clinical trials of the Bionaut platform.

One of Bionaut’s initial indications is the treatment of malignant brainstem gliomas, an aggressive pediatric cancer that often leaves patients with less than 12 months to live.

Powerful chemotherapies exist that could potentially defeat these brain tumors, however, the therapies are unable to efficiently penetrate the brain on their own. Previously, the only way to combat this was to deliver dangerously high doses of these drugs into the bloodstream and hope that some make it to the tumor and that the therapeutic benefits outweighed the damaging side effects to surrounding tissues.

However, the Bionaut platform is a potential gamechanger. The company will be using a custom Bionaut to deliver a powerful anti-cancer therapeutic (doxorubicin) directly to the site of the tumor, restoring the effectiveness of the chemotherapy drug without the side effects that arise when the drug is injected systemically into the bloodstream.

In June 2021, the FDA granted Bionaut Labs an Orphan Drug designation for the treatment of malignant gliomas.

Dandy Walker Syndrome is a congenital brain malformation usually diagnosed in childhood. It varies in severity and may cause a wide range of symptoms, including intellectual disabilities, delayed motor development, muscle stiffness and partial paralysis, seizures, hearing loss, and vision problems. The only treatment options available today involve invasive intracranial surgical procedures, which are prone to infections and complications. Many patients with Dandy Walker Syndrome suffer from shorter life spans with poor quality of life.

The Bionaut platform offers a minimally invasive local microsurgery procedure to eliminate the cyst that causes this condition and restore patient brain function and development.

In September 2021, the FDA granted Bionaut Labs a Humanitarian Use Device (HUD) designation for the treatment of Dandy Walker Syndrome.

A HUD designation is similar to the Orphan Drug designation, but for medical devices instead of drugs. The HUD program is intended to benefit patients in the treatment or diagnosis of a condition that affects less than 8,000 people in the United States per year. It is an alternative pathway for getting market approval for medical devices that may help people with rare diseases or conditions like Dandy Walker Syndrome, which affects only one out of every 25,000 to 30,000 people.

For Bionaut Labs, both the Orphan Drug and Humanitarian-Use designations are critical early milestones along a strategic regulatory pathway optimized to move the Bionaut platform into the clinic in the swiftest and most efficient way possible.

The Global CNS market is estimated to be $130B and is rapidly expanding. It is expected to reach $230B by 2028 and contains massive untapped potential due to the industry’s longtime inability to access deep brain areas safely.

Bionaut has a multi-pronged business strategy which is designed to facilitate multiple revenue streams through internal programs, collaborations, and licensing. As many drug candidates are hindered by imprecise targeting and remain unable to achieve effective therapeutic potentials, Bionaut intends to solve these inefficacies across multiple indications via building an internal development pipeline and via R&D partnerships with other biopharma companies. Below is an overview of the company’s plan to commercialize: 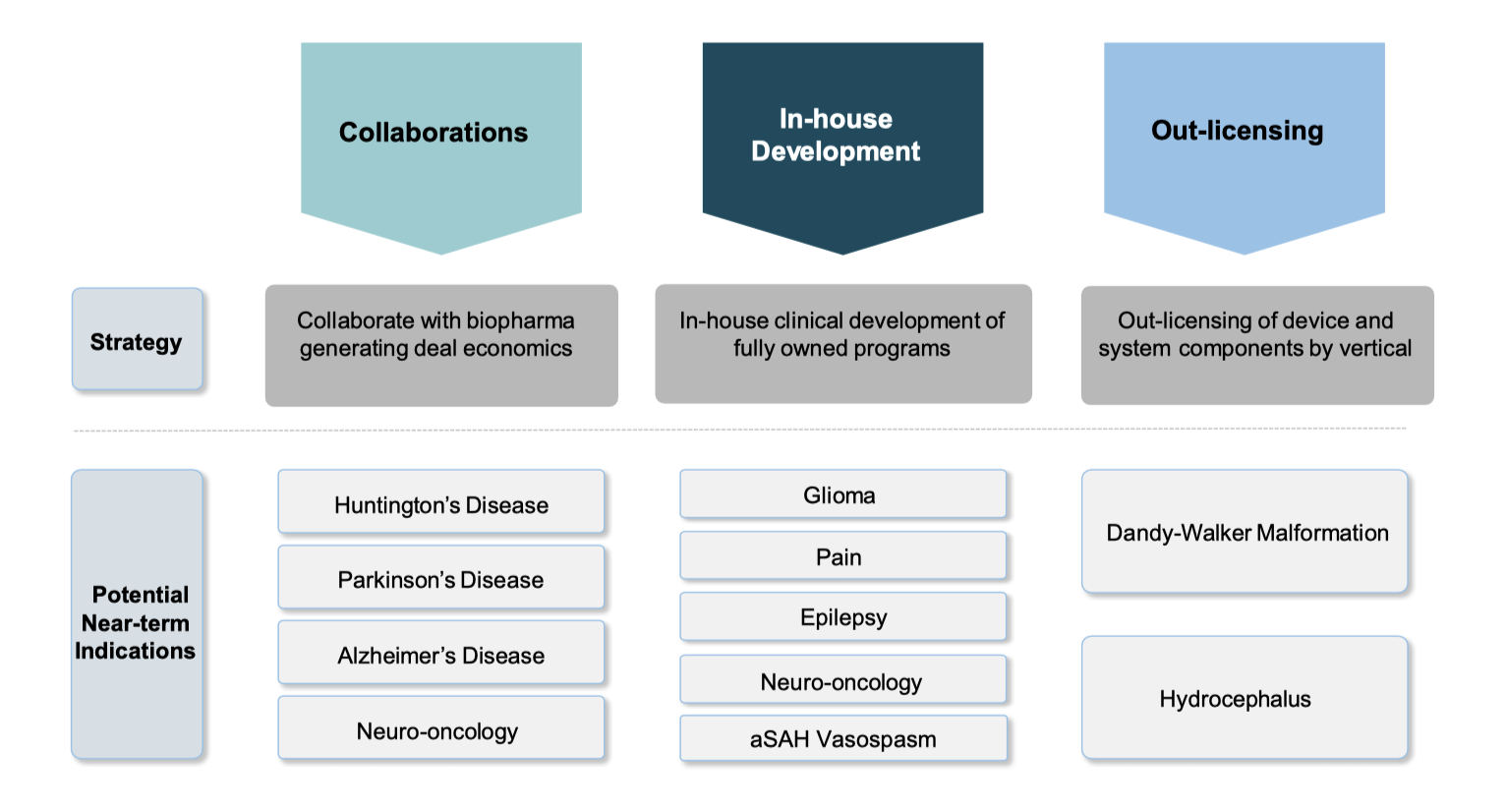 The company is led by CEO Michael Shpigelmacher, an accomplished manager of moonshot R&D projects and a robotics/Artificial Intelligence (AI) expert.

VP of Neuroscience, William Loudon, MD PhD, a pediatric surgeon and neurosurgery researcher of more than 20 years, and a director of Neurotrauma at CHOC and the Southern California Gamma Knife Center.

The firm’s advisory board is headed by Aya Jakobovits, PhD, Founding CEO of Kite Pharma (acquired by Gilead for $11.9B).

The company's $35M Series B round closed in Feb 2022 and will be used to bring the Bionaut platform through to Phase 1/2 human trials for its first two in-house programs and further establish external industry collaborations and additional in-house programs. The round was led by Khosla Ventures, with continued support from Upfront Ventures, Revolution, and Compound. 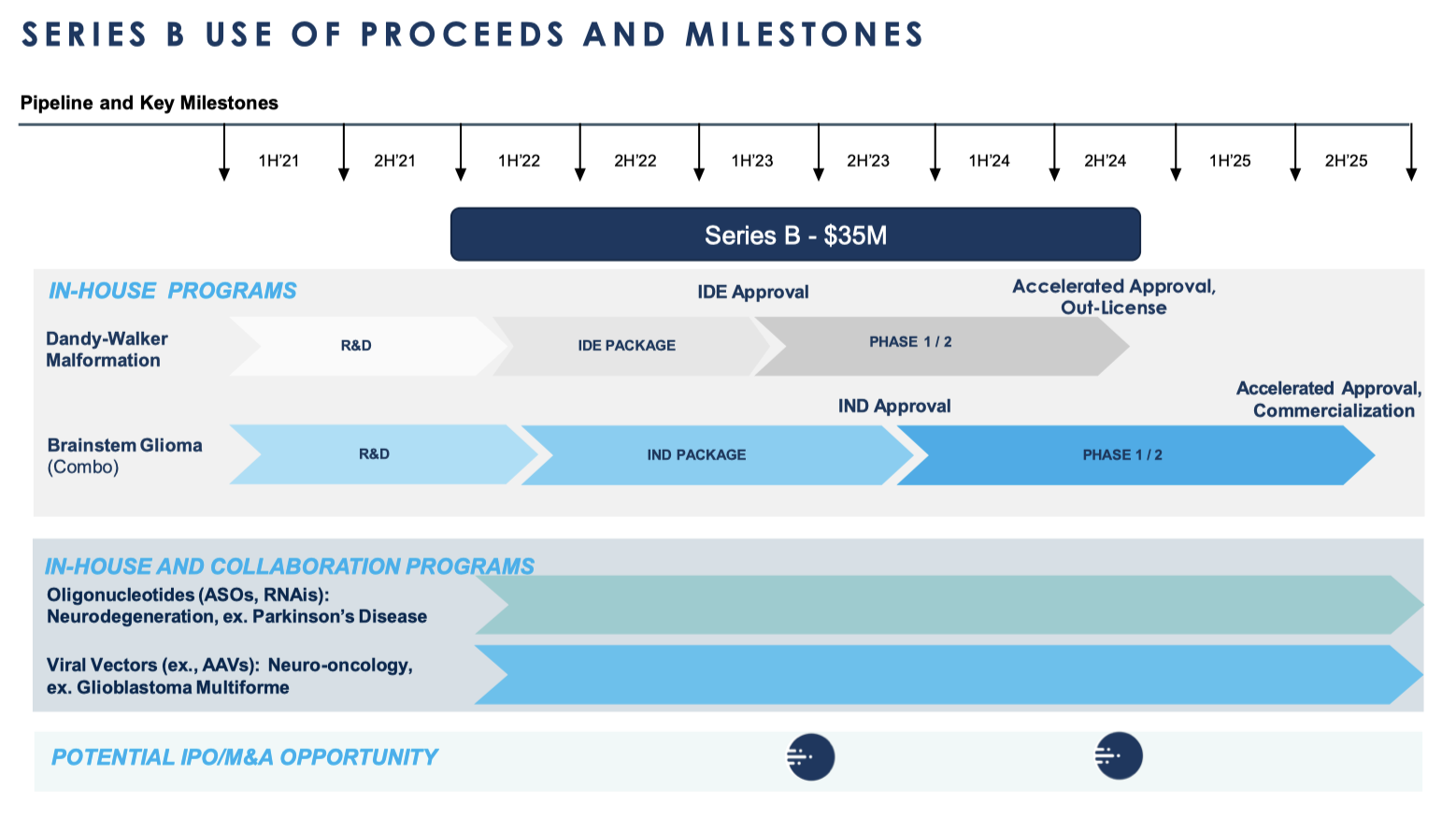