What would it mean to humanity if we could engineer and mass produce human tissues and organs for transplant?

The answer is hard to put an upper value on. Today, hundreds of millions of people have failing organs that could medically benefit from a ready supply of organ replacements. For some, the challenge with organ replacement is limited availability - a shocking 60% of properly donated organs are ultimately wasted due to a short viability clock on donor organs (just a few hours) and the fact that many donated organs ultimately aren't functioning well enough to permit transplant into a recipient. And for others, the transplant complications continue within them after surgery in the form of chronic rejection by their immune system.

It has recently been estimated that viable whole organ replacements, bridging treatments, and specialized engineered tissue could prevent >30% of all deaths, enhance longevity, and vastly improve quality of life for all.

And let’s not forget about biotech and pharma, where advanced medicines are the product, but lab-grown organs and specialized tissues would dramatically enhance the drug development process, making it faster, cheaper, more accurate, and intimately personalized (potentially testing drug cocktails on a patient's own cells).

The Trillion Dollar Question: how do we get to functional, lab-grown organs?

Anyone claiming that functional, engineered organs are going to be ready within the immediate future may not fully grasp the complex engineering, biological, clinical, and regulatory hurdles ahead. That said, we believe that the field is, for the first time, within striking distance this decade. And Volumetric has developed a bioprinting platform and phased development and commercial strategy to get us there. 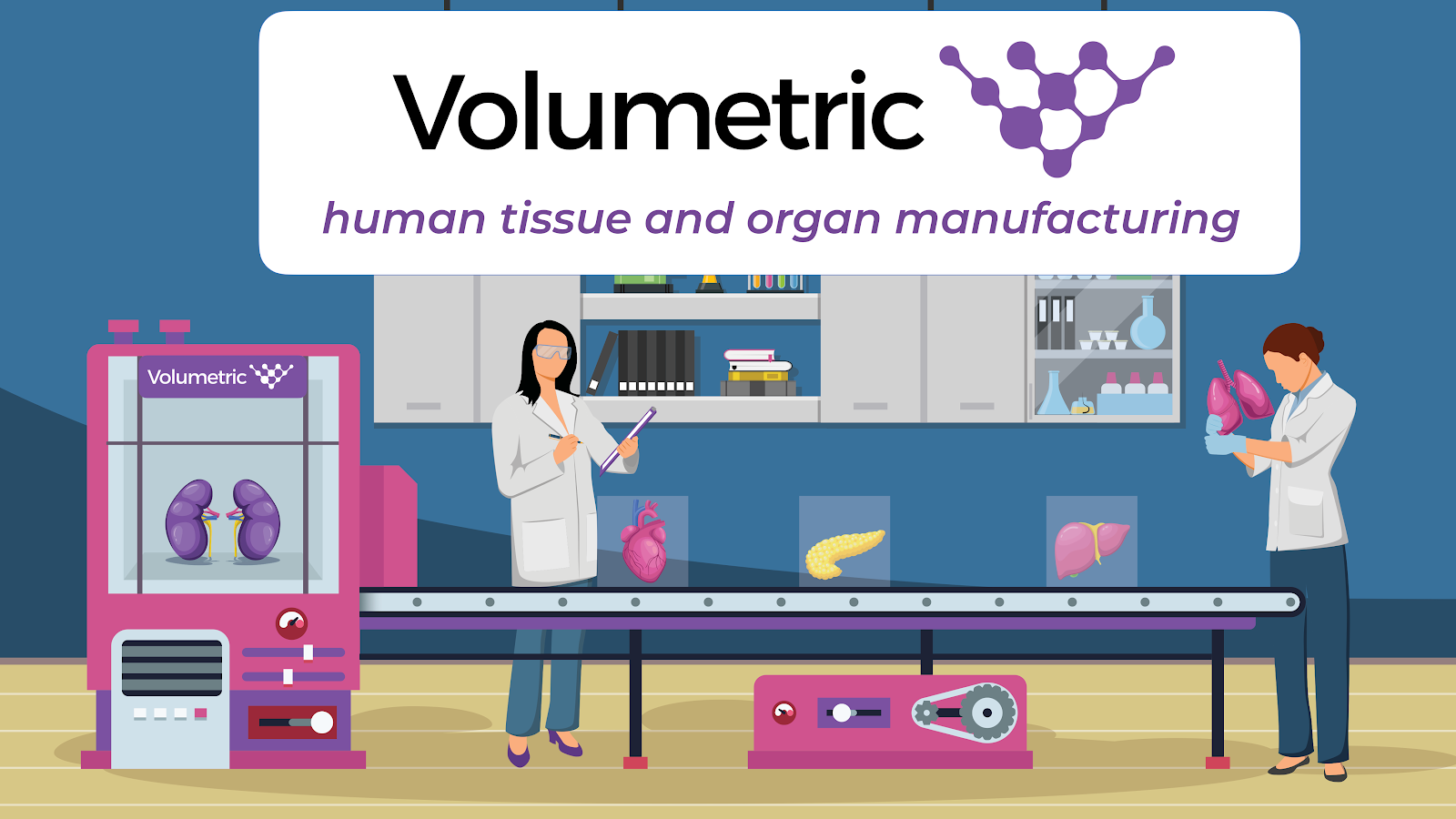 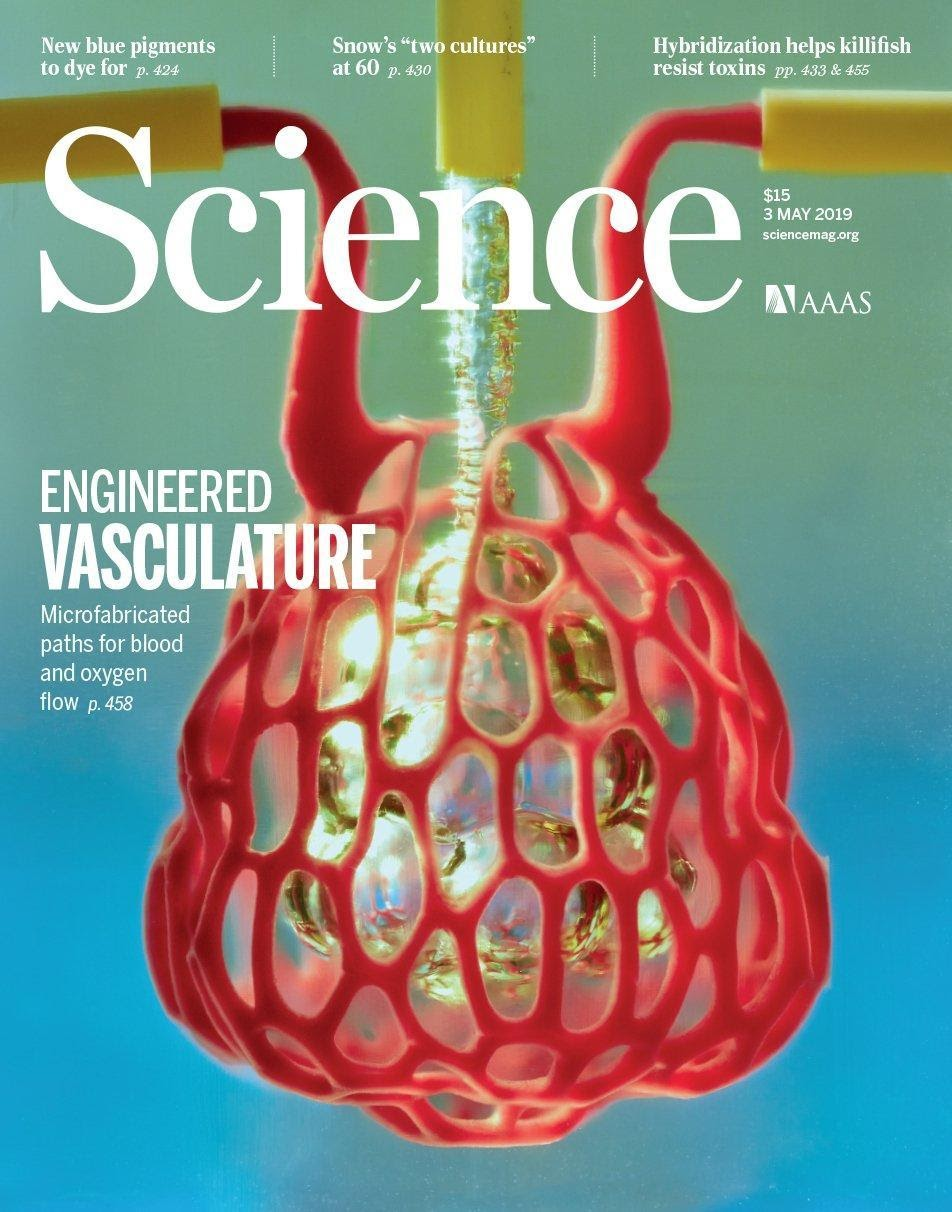 In order to discover new patient therapies, it is imperative that we are able to test them for safety and to understand how they work in excruciating detail. Unfortunately, the ways in which we are able to model human disease in animals and in petri dishes today cannot fully capture the complexities of the real thing.

Blood vessel networks are crucial conduits that support multicellular life. Organs like the lung, heart, brain, kidney, and liver are pervaded by incredibly elegant yet frighteningly complex vascular networks, each giving rise to unique and organ-specific nutrient and waste transport.

Without being able to recreate this complexity, current animal models/methods cannot be used to explore the critical links between tissue structure, nutrient delivery, and drug therapy. The world needs tools which can structure the extracellular matrix, position the cells, and build the vascular networks within engineered tissues in all three dimensions. Only Volumetric can build such breakthrough living tissue and living organ models.

Volumetric is the only provider of vascularized tissues in the market. The 3D tissues are unparalleled in the market and provide a 3D structure that holds up to 50 million cells and has a vasculature that mimics realistic flow of drugs and nutrients. They

These tissues are enabled by a revolutionary Bioprinter and method (projection stereolithography), the only one of its kind on the market, and Bioinks, proprietary materials that allow the company to produce biocompatible and sterilized structures and that can be seeded with living cells.

Volumetric produces the only projection stereolithography-based bioprinter available on the market and allows for sterile tissue fabrication at 50-100x the speed and 10x the resolution of competing extrusion-based printing. The print fidelity of the structures that are generated using our light-based bioprinting approach are unparalleled to what extrusion-based bioprinters can produce. The bioprinting platform was designed by scientists and bioengineers, with over 35 years of bioprinter development, for scientists and bioengineers, accommodating the sterile printing workflow and necessity to generate multiple samples at a high throughput with high experimental repeatability and low cost.

Volumetric bioinks are proprietary and stand as the only cell-compatible bioinks available for stereolithography printing, allowing the generation of soft, physiologically tissue-mimicking structures with high cell viability and functionality. They were perfected over the course of the last 6 years of pure research, allowing the Volumetric team to focus efforts towards scale-up of bioink production rather than dedicating resources to inventing bioinks, as competitors would.

Combining the bioprinter and bioinks, Volumetric is able to fabricate the most advanced engineered tissues ever fabricated. The company’s transformative work was published in Science in May 2019, where they demonstrated the ability to produce biologically inspired 3D branching blood vessels (300 microns in diameter), architectures that can be connected to a fluidic network and perfused for long periods of time, paving the way towards eventual human implantation and surgical anastomosis between the host and the printed biogels.

80% of Volumetric revenue today is attributed to bioprinter sales. Volumetic is assembling, testing, and shipping an entry-level bioprinter, the LumenX, via its distribution  partner CELLINK. Sales in this category represent a nearly equal split of custom bioprinter solutions delivered directly to Volumetric customers and large batch purchase of Lumen X bioprinters purchased by distribution partner CELLINK. Volumetric is also developing a higher-performance bioprinter in response to purchase orders by a few marquee customers. Much of the new design will be incorporated into the mass-produced LumenX2, which will replace the LumenX at the end of its product lifecycle in ~2 years.

Voumetric’s core technology and expertise is rooted in a biomaterials foundation with an understanding that control of materials will provide the physical infrastructure -- the scaffolding and the vasculature -- which will allow us to grow tissues on the scale of human organs. The team’s IP protected bioinks have been extensively optimized and are the primary materials used in their seminal Science publication.

20% of revenue to date is attributed to the Bioinks. As more Lumen X bioprinters continue to ship, the company anticipates the bioink sales will scale with the number sold. They are scaling in-house synthesis to match projected demands of customers throughout the current year. In anticipation of greater adoption of bioinks, the team has already initiated discussions with potential partners for outsourcing the raw material synthesis and bioink formulation preparation.

In the interim, the team has fielded large demand for the raw materials that go into the bioinks. Some of Volumetric’s customers are white-labeling the materials for use with their extrusion bioprinters while others will obtain the raw material for incorporation into custom formulation development. These consumables have a lucrative 80% margin.

Volumetric’s platform technology can immediately address pharmaceutical challenges associated with conventional drug screening. And as the sole provider of vascularized tissue in the industry, this enables monetization as well as subsidized R&D on the road to engineered organs. The company’s focus over the past 6 months has been in securing key industry partnerships and collaborating with each to explore a spectrum of custom biogel applications. The team maintains close relationships with partners and solicits their feedback in deciding on the next feature set of bioink and bioprinter products, a powerful feedback loop that will accelerate their competitive advantages.

The ability to make 3D multiscale vasculature is necessary for large scale, realistic tissue engineering of any solid organ. Volumetric is thus uniquely positioned to provide solutions to those who want to study the behavior of tissues (e.g., the pharmaceutical industry) as well as to provide tissue for clinical applications. For example, a very small piece of printed pancreas could be used to test diabetes drugs. That same tissue could be scaled up and implanted in a patient with diabetes. The Volumetric team has actually already produced a single, vascularized lung-mimicking air sac, which was a significant breakthrough. That said, the human lung contains ~600 million air sacs and is also at a scale that will require finer resolution.

Most everyone agrees that the journey to whole organs will certainly take time, however no other players in the space have the technology roadmap to get us there. Volumetric is primed to lead this charge, bringing the world ever closer to the holy grail of engineered whole organs, and use their platform to advance research and drug development efforts along the way. 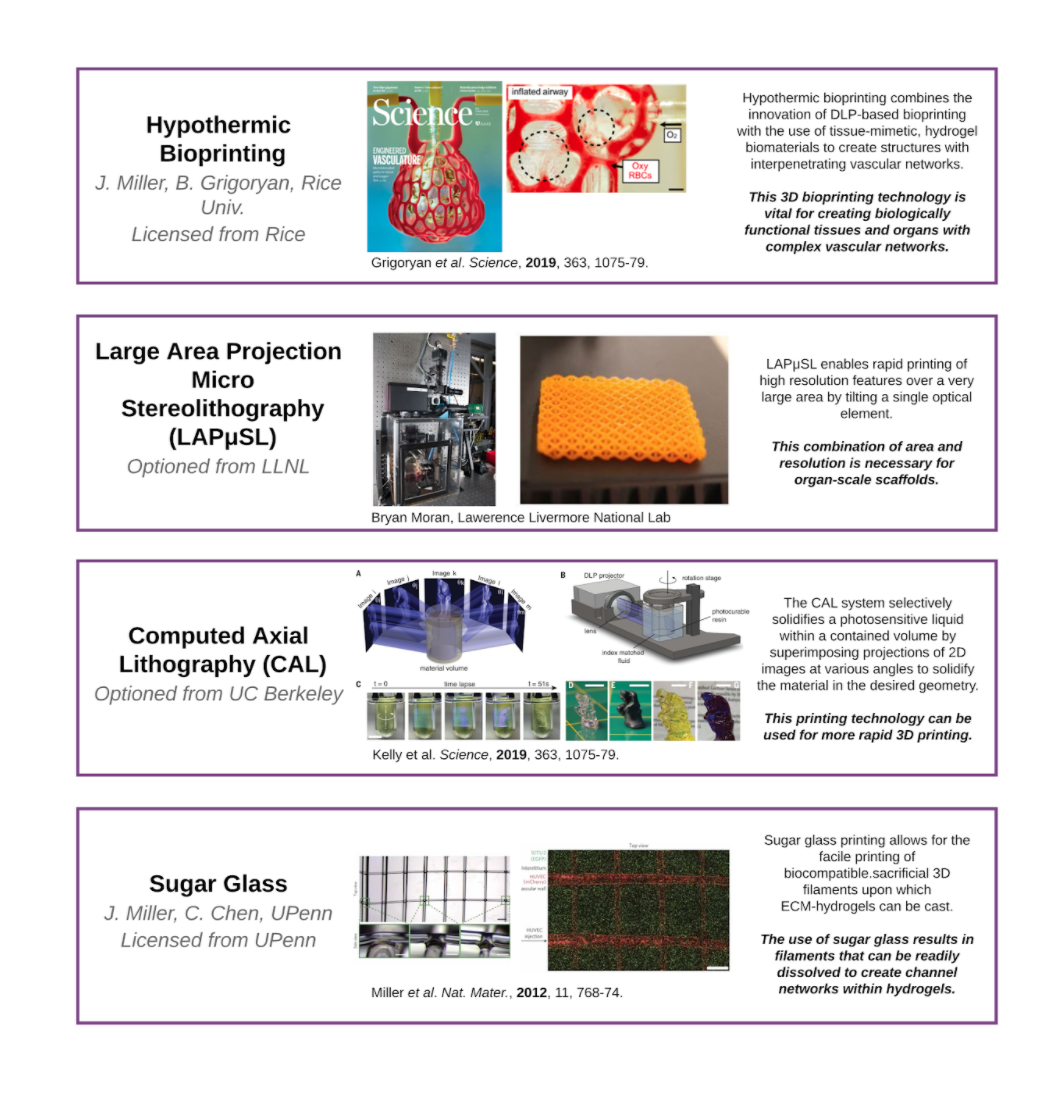 Competition from existing bioprinting technologies (i.e. extrusion-based printing) is a low risk.  Despite decades of development, extrusion cannot match the performance of stereolithography in any metric. A greater risk is competition based on the same platform technology. A large player in the stereolithography 3D printing market could theoretically leverage their sales, distribution, and technical knowledge to penetrate the 3D bioprinting market. This risk is mitigated by (a) Volumetric’s patents on the bioink formulation that makes it work for stereolithography and (b) the generally complex nature of bioprinting, which requires deep knowledge across several technical domains. Furthermore, the team has already partnered with the leading distributor of bio-printers and secured an exclusive contract. Thus, while a new entrant could potentially reverse-engineer the entry-level bio-printer and starter-pack bio-inks, it is unlikely that they would achieve significant market penetration given that Volumetric has locked down the largest distribution channel and has a significant head start.

This risk is application-specific. While no other existing product can print or otherwise make what Volumetric printers and bioinks can, some customers may find that a product lacking these features still fulfills their needs. An example is Emulate’s bio-chips, or even culture cells on a Corning petri dish. Volumetric, Emulate, and Corning fulfill the need for drug toxicity testing, so there is a risk that customers will fail to adopt the bioprinting platform. Volumetric is mitigating this risk by not committing to a single assay or clinical application. Instead, we are engaging in a prolonged, profitable customer discovery process by selling bioprinters and letting our customers figure out the applications that the printers uniquely enable and which can be substituted.

There is a risk of competitors or trolls patenting key aspects of a bio-printer design, or certain applications, which would make it difficult for Volumetric to provide a complete solution to customers. For example, one company has patented the addition of a HEPA filter to a bioprinter enclosure. While this is a dubious patent, restrictions like this on the printer features could compromise the value of our product. To mitigate this risk, the company plans to invest significantly in IP filing over the next 18 months, focusing on the printer hardware, inks, bioprinted tissue architecture, and print process.

Regulatory risk will come into play when Volumetric’s products are used to make medical devices or for personalized medicine, such as testing the effects of a cancer drug on tissues 3D printed from the patient’s own cells in order to guide treatment. Some of these regulations don’t yet exist - the FDA has a team dedicated to designing the regulatory process for 3D printed products. If, for example, they decide that a 3D printed medical device requires a full clinical trial rather than a 510(k) clearance, Volumetric will need to strategize accordingly. The team has hired a consultant who recently retired from the FDA and has over 20 years experience in the FDA to help chart the regulatory path of our 3D printed organs.

Any application of bioprinting that requires a clinical trial is inherently risky. The ultimate vision of the company is to provide full organ replacements, but the technology for that is not yet mature. If the first implanted organ fails, that will impact the effort considerably. This risk is mitigated by our strategy of first selling the technology to researchers and innovation groups within big pharma. That way we distribute the risk of technical failure across all of our customers, letting them identify the features we need to make a bioprinting process that is robust enough for clinical use.

Jordan leads the Physiologic Systems and Advanced Materials Laboratory where his team works to develop novel biomaterials to study cell-matrix interactions and vascularization.

Bagrat led development of a new technique for 3D printing tissue with entangled vascular networks similar to the body’s natural passageways for blood, air and other vital fluids. This work was featured on the cover of Science. 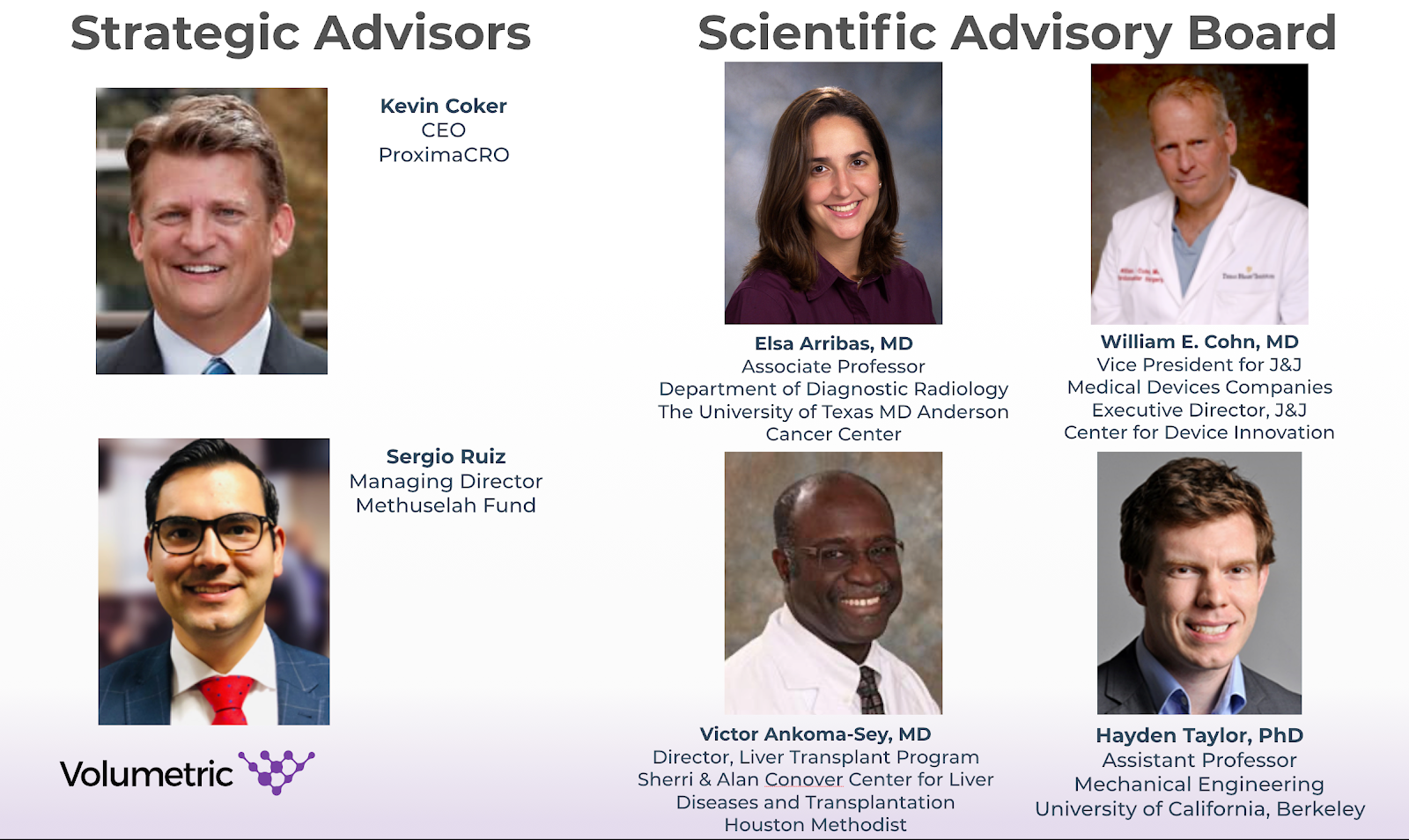