The OccamzRazor team has deep domain expertise in machine learning (ML), natural language processing (NLP), and computational and systems biology. Its Founder and CEO, Dr. Katharina Volz, received Stanford University's first PhD in Stem Cell Biology & Regenerative Medicine in a record 2.5 years. She has been immersed in the biomedical sciences for 12 years and was recently listed on Forbes 30u30 (Science). The company's Head of Science, Dr. Martin Bringmann, studied Molecular Biology at the Max Planck Institute and completed his postdoctoral research at Stanford University. Dr. Berk Kapicioglu, OccamzRazor’s Head of Artificial Intelligence, is the former Head of AI at Foursquare and earned a PhD in Computer Science and Artificial Intelligence from Princeton University. Tarik Koc rounds out the core team as Head of Engineering and is a full stack expert with 12 years of experience scaling startups into enterprises and has a BS in Computer Science and Biomathematics from Virginia Tech.

The company’s computational design platform is taking a novel systems-based approach to identifying and validating proprietary therapeutics for the treatment of Parkinson's. Parkinson’s is expected to grow to a $5.26 billion annual market by 2022.

In addition to Parkinson’s, OccamzRazor’s platform is directly applicable to other nervous system indications like Alzheimer's, which was $2.9 billion in 2016 and is predicted to reach $14.8 billion by 2026.

Parkinson’s Disease is one of the most common neurological disorders, and the global prevalence is projected to grow to 2.89 million cases worldwide by 2022. Through advances in technology and drug development, the Parkinson’s market in 2022 is expected to yield $5.26 billion in global market sales, with $2.33 billion from the U.S. market (source). The combined direct and indirect costs of Parkinson’s in the U.S., including treatment, disability, and similar payments, plus lost income from an inability to work, are estimated at $25 billion per year.

In addition to Parkinson’s, OccamzRazor’s computational design platform and team are directly applicable for other nervous system indications like Alzheimer's. The global AD market, worth $2.9 billion in 2016, is predicted to reach $14.8 billion by 2026 across US, Japan, France, Germany, Italy, Spain, and the UK (the seven major markets), according to business information and analytics company GlobalData, representing an annual growth rate of 17.5%.

Furthermore, a recent research report from the McKinsey Global Institute estimates that applying big-data strategies to pharmaceutical decision making could generate up to $100 billion in value annually across the US health-care system.

The traditional approach to drug development is based on testing them in preclinical animal models, an approach that has been used for decades. The major problem with this approach, especially when tackling complex neurological conditions, is our inability to recapitulate complex human diseases in animals. As a result, current animal models are extremely limited at predicting what drugs will work in humans, thus the disproportionately high rate of clinical trial failures in neurodegenerative disease research compared to other diseases.

For example, “as cancer drugs going through clinical trials have reached a 20% success rate, the search for a drug to treat dementia has been one of modern medicine's greatest frustrations: a 99.6% failure rate.” In market terms, this means large pharma and biotech companies are desperate for a paradigm shift to continue refilling their pipelines with new therapies.

The key to understanding and treating complex diseases like Parkinson's is understanding the interactions that occur between all related cellular components (genes, transcripts, proteins, organelles, etc.). Simple diseases have relatively linear mechanisms that allow researchers to identify their physiological causes and then fix them to eliminate their symptoms. Complex diseases are the result of many different mechanisms that interact together indirectly, making their causes far more varried compared to those of simpler diseases.

OccamzRazor believes it is necessary to identify the multiple causes and physiological effects of complex diseases as a means of designing therapies to treat them. Results from early company research indicate such a multi-dimensional approach is critical to understanding and fixing the intricate web of physiological causes behind diseases like Parkinson's. 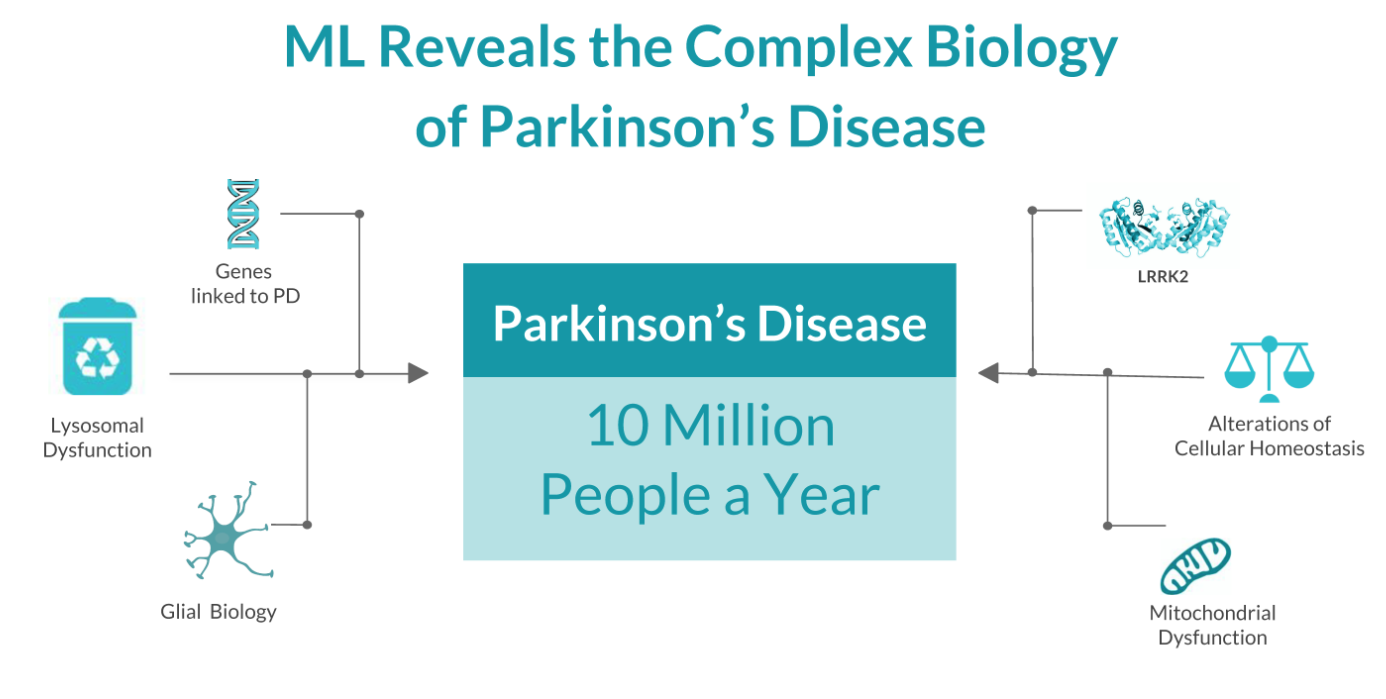 OccamzRazor has made significant progress on two fronts recently. First is advancing their natural language processing (NLP) pipeline to unlock knowledge from unstructured data sources. This involved training ML models to understand billions of relationships between tagged words and then optimizing the underlying processes for a 10x improvement in performance.

Part of OccamzRazor’s cutting-edge NLP work has been co-published with one of the world's leading NLP research group at Stanford University in a prestigious NLP journal, Computational Linguistics, which is peer-reviewed selectively by the Association for Computational Linguistics (ACL). The company already has opportunities to license elements of its platform for program screening purposes.

The company is also advancing their knowledge graph and target identification technology. This involves integrating NLP to populate the platform's knowledge graph with high-quality relationships between biological entities like genes, proteins, protein kinases, cell organelles, and mutations. The incorporation of these high-quality relationships is essential to understanding and treating PD, and sets OccamzRazor apart from its competitors which overlook the vast, high-quality data in unstructured data sources, which some estimate represent 80% of the relevant data available. These advances have allowed the company's platform to predict targets the biopharmaceutical industry is already pursuing and to identify novel targets that were previously unknown.

Validation analysis is currently being performed on these novel targets, informed partly by integrating more data and expanding the graph to reveal alternate strategies for understanding the key drivers behind targets. One dataset informing the analysis is provided by the leading Parkinson's Institute and Clinical Center, a worldwide leader in PD research and clinical care, which seeks to use OccamzRazor technology to breakthrough the impasse in finding PD treatments by sub-classifying PD and developing targeted, patient-specific cures.

OccamzRazor is validating its proprietary therapies for Parkinson's using actual patient tissues. OccamzRazor has proprietary access to an extensive set of stem cell-derived, dopaminergic neurons from verified PD patients, thereby allowing the clinical testing of combinatorial therapeutic treatments in subgroup and patient-specific environments. This testing provides a key differentiator and the derived data represents a significant moat and competitive advantage.

Other select companies using AI and machine learning for drug discovery include:

What separates OccamzRazor from its competitors is their ability to use unstructured data that describe disease processes (which is the most relevant for understanding neurodegenerative disease pathologies) and structured data (like genomics) while also testing AI-generated hypothesis (drug targets) for specific subtypes of the disease in actual human patient tissue. 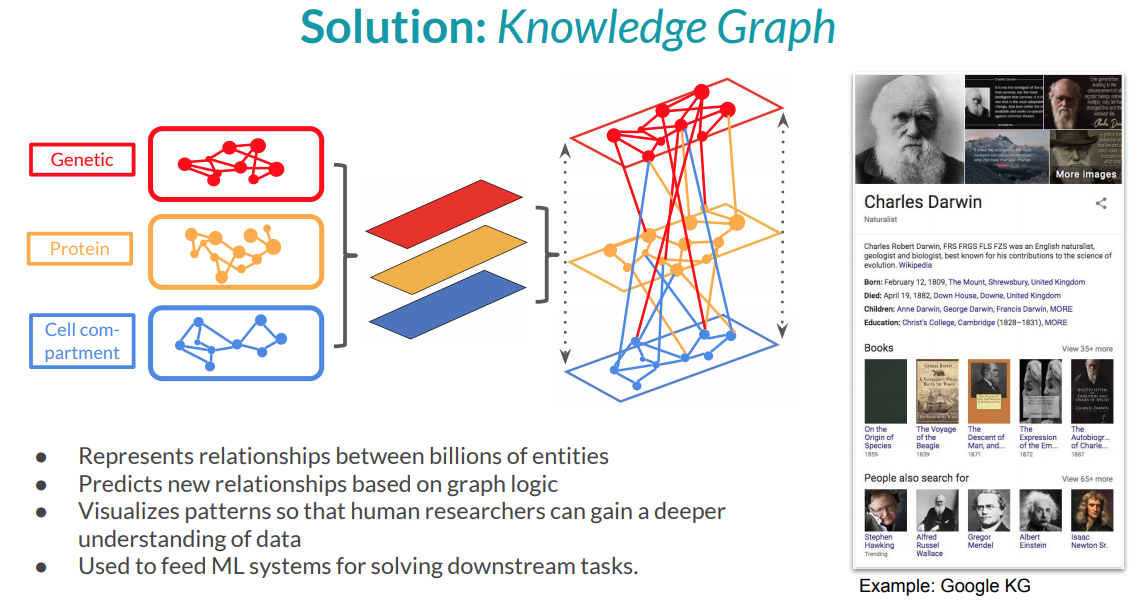 OccamzRazor believes its competitive advantages are best leveraged for applications where a disease's causes are not accessible to traditional research paradigms and the platform can be used to target the myriad interactions behind complex diseases. Going forward, the company's core platform technology will extend to other indications. One promising direction includes better understanding the complex interactions behind Alzheimer's disease. Another is extending the platform in altogether new directions like oncology.

OccamzRazor is currently working with Parkinson’s researchers to inform PD research and discovery efforts. In the future, the platform may be used in real-time to extend its use as a clinical decision support system for developing individualized treatment strategies. Each of these activities is generating valuable data for training the platform’s models and is a source of grant money for funding the company. While only temporary, they are significant aspects of the company’s launch and platform development plans. 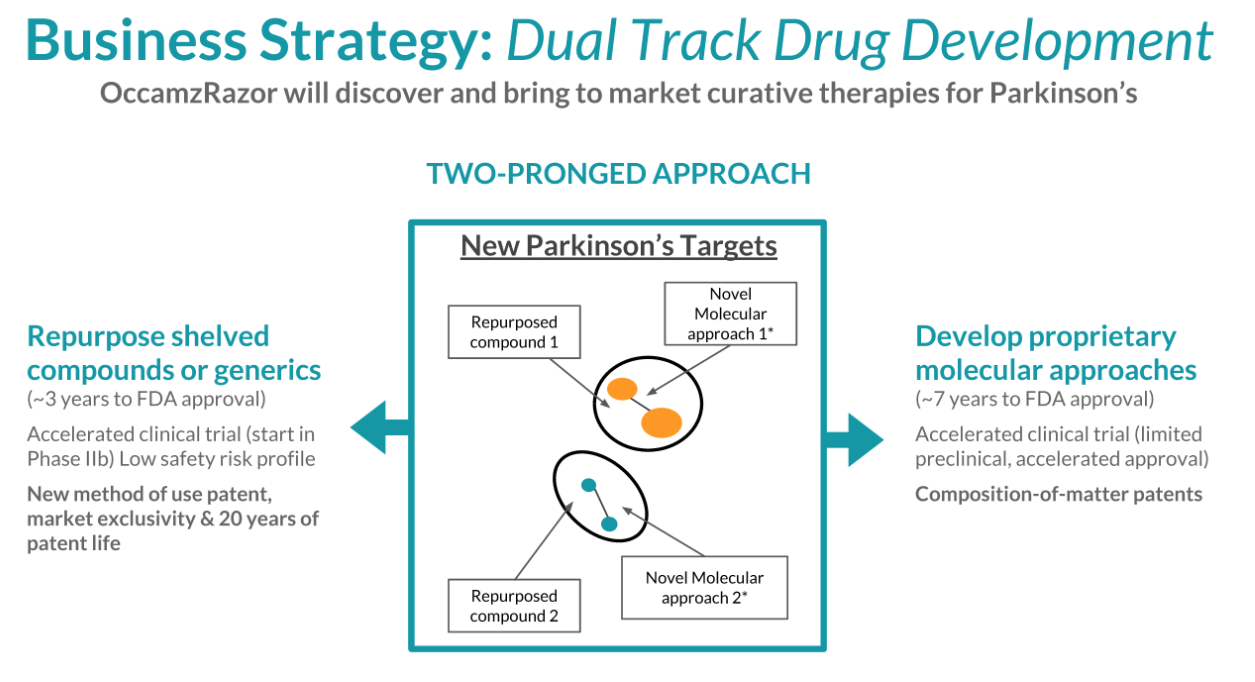 Importantly, OccamzRazor is using the above data to help train the platform for the purpose of designing novel, proprietary therapeutics. The company anticipates its drug discovery efforts will yield joint ventures and/or cross-licensing opportunities. OccamzRazor has a two-tier strategy for drug development to maximize success. It is repurposing shelved compounds and generics to accelerate clinical trial start times and reduce related safety risk profiles. 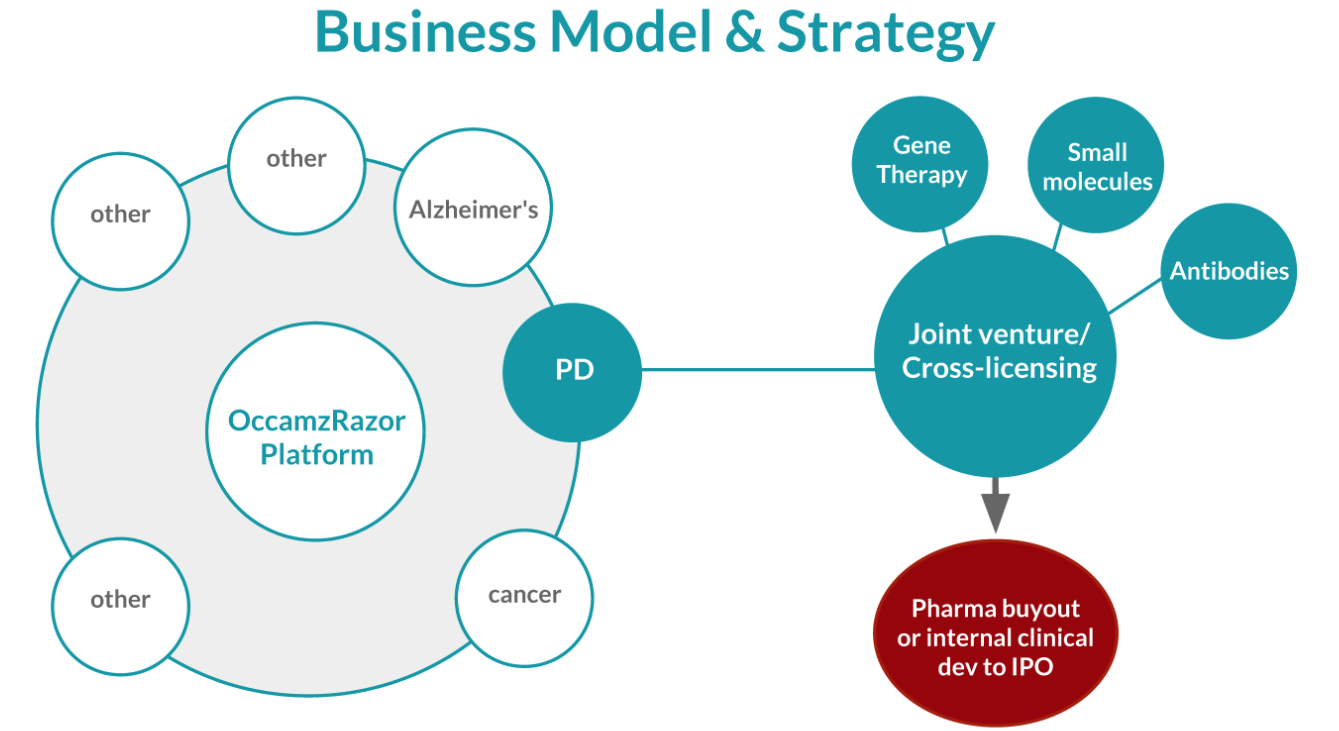 This compresses the FDA approval cycle and results in new method of use patents with 20 year market exclusivity. It is also developing proprietary molecular approaches that will require limited pre-clinical data to receive accelerated approval. This also significantly compresses the FDA approval pathway and can lead to composition of matter patents with 5 year market exclusivity.

The underlying computational design platform is being patented by the company. The company's continued research into new algorithms and databases will further increase the proprietary position of its platform. OccamzRazor will file patent filings on novel drugs or drug combinations discovered via the platform. In addition, part of OccamzRazor's strategy is to maintain certain aspects of the platform design as trade secrets in order to avoid public patent filings and disclosing valuable know-how.

IP claims will primarily be specific composition of matter, but may also include library and/or topological descriptions. In this way, the company will construct layered protections of its highest-value therapeutic assets. OccamzRazor has been working with Nicole Shanahan at Stanford University’s CodeX legal center since the company’s inception.

Dr. Katharina Volz is CEO and Founder of OccamzRazor. She was Stanford University's first PhD in Stem Cell Biology & Regenerative Medicine, earning her degree in just two and a half years. Dr. Volz attended Germany's Biotechnology High School and was listed on Forbes 30u30 (Science). She has been awarded multiple fellowships and awards doing research in labs at 10 prestigious institutions around the world, including: Harvard, UCLA, HHMI, Ohio State, TU Graz and Stanford University.

Tarik Koc is Head of Engineering at OccamzRazor. He was a Software Engineer at leading advertising services company YieldMo before joining the company. Mr. Koc received his BS in Computer Science and Mathematics from Virginia Tech.

Neurodegenerative disease companies that have partnered with or been acquired by major pharmaceutical companies include: Avexis, BenevolentAI and Heptares:

Learn more from our partners at the Khan Academy:

If you're interested in donating to Parkinson's research efforts, learn more from our partners at the Michael J. Fox Foundation.

If you're interested in donating to Alzheimer's research efforts, learn more from our partners at the Alzheimer's Disease Foundation.